Dylan Pinker from Advanced Robot, emphasises the importance of animal health and a holistic approach to mobility in the fight against lameness on robotic farms. Article first published in British Dairying August edition. 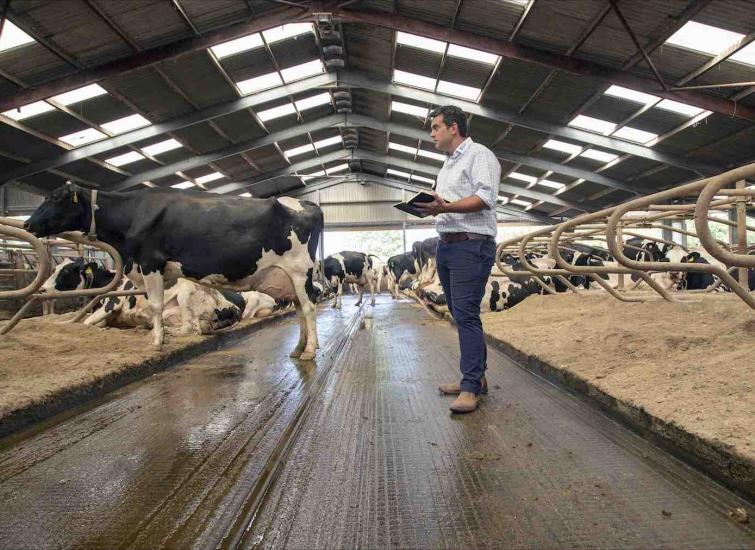 “Cow health is central to successful and profitable dairy enterprises and no less so with herds on automatic milking systems. Attention to detail is key here, quite often health issues for a normal herd can be exacerbated for those on robots. At Advanced Robot we work with a large number of robot herds across the UK and our experience shows, whilst you may get away with some health issues in a conventional herd – you’re unlikely to with robots!

“We understand that in order to move farms forward, low levels of lameness is a key driver to the success of a robotic unit. To achieve success, we have a holistic approach to mobility – we don’t just treat lameness but monitor all areas in order to prevent it and to keep lowering levels of lameness in the future. We do this through a number of measures including proactive mobility scoring and therapeutic trimming.”

The cost of lameness in robotic herds
The latest figures indicate that 37% of the national herd are experiencing some form of lameness at any one-time, costing on average £300 per incidence. For a high yielding robot herd, where intakes are greater than a conventional herd, small changes in lameness can have a big effect.

Mr Pinker continues, “To effectively milk ‘voluntarily’ cows need to be confident on their feet. If they aren’t, they simply won’t put themselves in an unfamiliar situation - meaning no visits and no milk!With lame or sick cows, not only does this lead to a vicious cycle of the cow dropping in production as well as performance, it also increases the daily workload of the farm, spending time treating the cow, which ultimately, costs money.”

“The majority of milk contracts now require regular mobility scores for the herd, as well as setting their own KPI’s for lameness levels. The introduction of RoMs has been a good step forward to improving herd mobility. However, it should be noted there is a difference between mobility and lameness. As such, when we do a mobility score there can be a discrepancy between what we find and what our clients may have recorded. A mobility score picks up, not just on lame cows, but also cows who are not 100% mobile. It’s the highlighting of those cows, which gives us the opportunity to prevent lameness for example, the cow may just need therapeutic trimming to improve her mobility. Drawing attention to these factors, enables us to drive down lameness levels within the herd year on year.

Dylan continues, “Studies have shown that an increase of moving from twice a day milking to three times a day, increases milk production by 18%. Table 1 shows the target milking’s, comparing a conventional and robotic milking system. It demonstrates the vast increase in milkings on the robot which gives a much greater potential for milk production. However, this comes down to cow health and mobility, reinforcing the fact that you need minimal levels of lameness to maintain these visit levels.

Setting up a routine
“Producers should be like their cows and be routine animals! Lame cows drop out of routine which causes a difference in behaviour. Data can be harvested from the robot, to help quickly identify a cow which has dropped in milk or visiting behaviour. We recommend setting up KPI’s on your robot programme to flag up the variance in milk production, any cow which has dropped 10% or more in yield for three consecutive days should be looked at and checked for health or lameness issues. The robot and the cow will tell you what you need to know! With the wealth of information available, cows are much easier to control, and are much more predictable. This allows you to run your system with greater attention to detail than a conventional system. Monitor and interpret the data alongside your farm’s KPI’s to achieve maximum efficiency. It’s surprising that robot manufacturers have not made a move to utilise the available data to help farms identify cows becoming lame. Less visits to the robot (either milking or refusals) combined with a potential drop in rumination and/or lying time are all key indicators to the start of a lameness event.”

“We recommend studying the number of refusals per cow per week. If the refusals are starting to drop, especially in early to mid-lactation, but milk visits are maintained, then I would advise examining the cow for any health or lameness issues. Milking times can also be used to identify a lame cow. When the robot is “quiet”, due to cow behaviour affected by feeding times, you may find that lame cows visit more at this time due to there being less competition at the robot.”

“It’s also important to consider the environment for the cows such as lighting, pathways, ventilation and even staff as these all have an impact on robot visits.”

Mobility is key!
“A mobile cow has a much greater potential to produce more milk, ultimately impacting on profitability. A routine foot trimming plan should be in place with an early lactation trim typically between 80-120 days in milk and a minimum of 8 weeks before calving, (usually done at drying off and on all four feet). Lameness not only affects cow behaviour or visits to the robot, but also has a much greater impact upon animal health.”

“Lame cows will have a reduced feed intake, resulting in a negative energy balance. The loss of weight and condition can start even before lameness is observed. It may be more difficult to identify the signs of oestrus in lame cows and these signs may be less obvious, or apparent for shorter periods. Stress caused by lameness can have an adverse effect on ovarian function and follicular development, with a potential delay in cycling or in the timing of ovulation. Often overlooked, inflammation can be associated with an increase in the service to conception interval. Chronic inflammatory changes in the tissues of the foot can take a long time to treat, so these effects can be longer lasting.”

“Our experience over the last 10 years shows us that whilst lame cows are more exposed than a conventional herd, on the flip side when we reduce lameness the rewards are much higher, inspiring us to keep challenging lameness as part of our overall goal to improve animal health.”

Maximise the potential of your robotic system. Advanced Robot have over 10 years of experience in getting the balan… https://t.co/UxOqYapKda | Advanced Ruminant Nutrition 6 days, 7 hours ago

RT @GOikonomou: I am so lucky to be working with such a great group🙂🙂🙂! Great presentations of our lameness work at #WBC2022… https://t.co/Uof0RGmqYb | Advanced Ruminant Nutrition 2 weeks, 4 days ago

Did you know that lameness has a major impact on fertility. Lame cows loose weight and body condition, significantl… https://t.co/ULXtZFKjrM | Advanced Ruminant Nutrition 2 weeks, 4 days ago